Let us take you back 10 years ago – if you’d have to answer then who are the most powerful people in the world of fashion, you’d say traditional names like Anna Wintour, Grace Coddington and Karl Lagerfeld. Right? But if we would ask u the same question today, the list would be longer and include influencers and fashion bloggers such as Chiara Ferragni, Aimee Song and Caroline Daur. In just a few years the power has shifted. While in the past the printed magazines were the bible for fashion lovers all over the world, today the bible is just one swipe away (literally).

Elle, L’Officiel, harper’s bazaar, W and of course – Vogue, have always been a must have item in every fashionista’s bag. Everything you wanted to know about the past, present and future of fashion was inside these luxurious papers (which we all said AMEN to). Magazine editors were the ones who helped make fashion bloggers who they are today, by integrating them in personal columns, publishing photos and even writing profile articles about them. It used to be a friendly relationship between editors and bloggers, but it quickly shifted into a love-hate relationship.

But how did it all start? Fashion bloggers emerged around 2008, some say that the secret lies in that timing – It happened at the same time that social media really started taking over the world (especially instagram). The bloggers immediately understood people’s need to see what was happening in the world right here and right now. By publishing every chic thing that was going on in their lives, they soon became more relevant and up to date than magazines, which published stories, collections and trends weeks after they actually happened.

People suddenly preferred receiving information from bloggers like Leandra Medine, Camila Coelho and Pernille Teisbaek because they could relate to their personalities alongside their style. Well, who wouldn’t relate do Leandra’s man-repelling attitude?

Beauty brands quickly understood the power of influencers and made them their number one choice of talent (Bye bye printed commercials). In a research made in 2007 (According to Celebrity Intelligence), for every 1$ spent on influencers the brand earned 13.22$. Shocking, we know! With this kind of data, who wouldn’t want to invest in bloggers?

Not just editors were impacted by the new rising stars, but also creative directors. They had to rethink their approach, since their clients, now wanted everything to be immediate and personal. As a result, they needed to create a lot of collections, with a preference to Ready-To-Wear clothes that had a story behind them. This kind of stress really impacted creative directors, which have struggled to survive for a long period of time in one Fashion house. Raf Simons and Hedi Salimane are two perfect examples to the fact that the new media is threatening creative director’s status alongside editors and journalists.

The shift in power made a lot of editors quite annoyed (to say the least). In 2016, Vogue Creative Digital Director Sally Singer decided to express her mind about bloggers in the magazine’s website: “Note to bloggers who change head-to-toe, paid-to-wear outfits every hour: Please stop. Find another business. You are heralding the death of style.” Ouch. On the other side of the divide, after the furious column was published, the bloggers replied on social media (of course). Susie Lau (known as Susie bubble( tweeted: “bloggers who wear paid-for outfits or borrowed clothes are merely doing the more overt equivalent of that editorial-credit system. It’s just that bloggers sadly don’t have prestigious titles/publications to hide behind and represent themselves solely.” Well said.

Both sides have ceased fire since then, but the partnership was never the same. Even though some magazines do publish photos and information about fashion bloggers, it seems that a cold war is still going on.

There is no doubt that the power of fashion magazines is decreasing, but a commercial client still needs both print and internet in order to reach a bigger audience, and obviously magazines still have a lot of influence. Even though bloggers offer immediate information, they can’t replace the history and the experience that traditional prints like vogue have. The ideal situation is for the traditional journalism and the new-age journalism to join forces with chic outfits and on-point makeup, to create an incredible future of fashion. 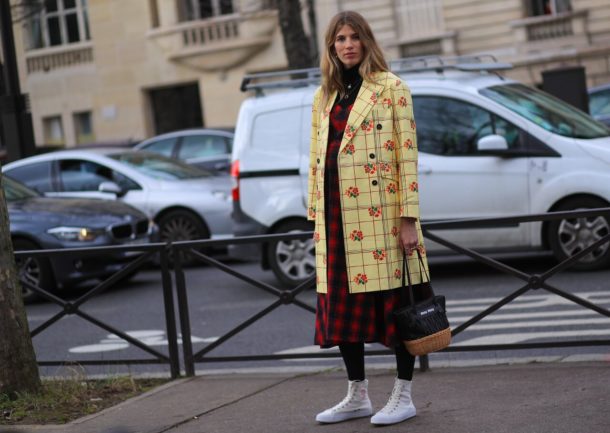 Next story
Daddy cool? I got it from my fashionable Mama
Being pregnant is a hard, long and exhausting journey. It’s nine months of constant body changes and we all know maternity wardrobes decisions can be very tricky. You’re probably tired…