Rosy Cheeks Forever: How To Wear The OTT Blush Trend Like A Pro

At the inception of makeup itself, blush was one of a few cardinal beauty staples that people would go to great lengths (and expense) to have warming their faces.

Let me indulge you in a bit of beauty history:

In one of its first forms, well-to-do Romans used a red powder from the mineral Cinnabar to stain their cheeks. This was before they discovered that Cinnabar is full of Mercury, and by default, highly toxic. Taking note, blush aficionados during the Middle Ages adopted a more natural approach, turning to strawberries and water as their flush of choice. This predilection with natural cosmetics continued into the Georgian era, where the dye Carmine, sourced (very organically) from ground insects, lent a superior scarlet tint.

Fortunately for us, the by-products of our multi-millennia-long obsession with blush are the dusty, dewy, creamy, rosy compacts we have today. And, despite its near endless, maniacal and sometimes fatal iterations, blush has endured and evolved, and still remains a steadfast essential in beauty cabinets the world over.

But there’s one more critical stage in the evolution of blush that happened somewhere in between the Georgian era and 2018. It just got really boring. It became to makeup what brushing teeth is to self-care: a mundane necessity.

Could this be it? The end of blush? After all this time? Quelle-Horreur!

In its longstanding tradition of reinvention, it…um, it reinvented itself. Well, actually, we reinvented it. And by we, I mean the following visionaries – those fearless enough to pick up their blush brushes and get painting, heralding in a new era of rosy cheeks.

So, without further ado, I welcome you to the epoch of OTT blush.

In case it’s not already obvious, I’m front and center, completely and utterly here for this trend.

It’s so simple. You just pile on an abundance of blush and voila. That’s it. You don’t even have to worry about where it’s going. Heck, take it all the way up around your eyes. Who’s stopping you?

Lots of blush calls for the most unrivaled of all the rosy contenders. The ones with real staying power.

Your best bet is to layer blushes. You’ll get the best result when you set a powder blush like the Hourglass Ambient Lighting Blush, or the iconic Nars powder blush, under a generous stain of cream blush. Look no further than Glossier’s Cloud Paint gel-cream blush, or Kosas’s Colour + Light Cream Duo.

You may, however, like your Georgian counterparts, prefer a more natural approach. Try the RMS Lip2Cheek. Its concentrated pigment lends itself perfectly to the more-is-more vibe. Plus, its multi-function as a lip-stain is a tidy bonus.

If you’re a stickler for the classics then you’ll be pleased to know that Dior’s Rouge Blush and Chanel’s Joues Contraste are both as satisfyingly radiant as each other.

Rouge Blush is buildable, so you can target the apple of your cheek with a burst of pigment and fade it out into a cloudy glow at the edges.

Chanel’s on the other hand, lends the skin a gentle glow and a silky finish that melds seamlessly into the skin.

So go forth, crimson-cheeked belles! And remember, if you think you’re wearing enough blush, you’re probably not. 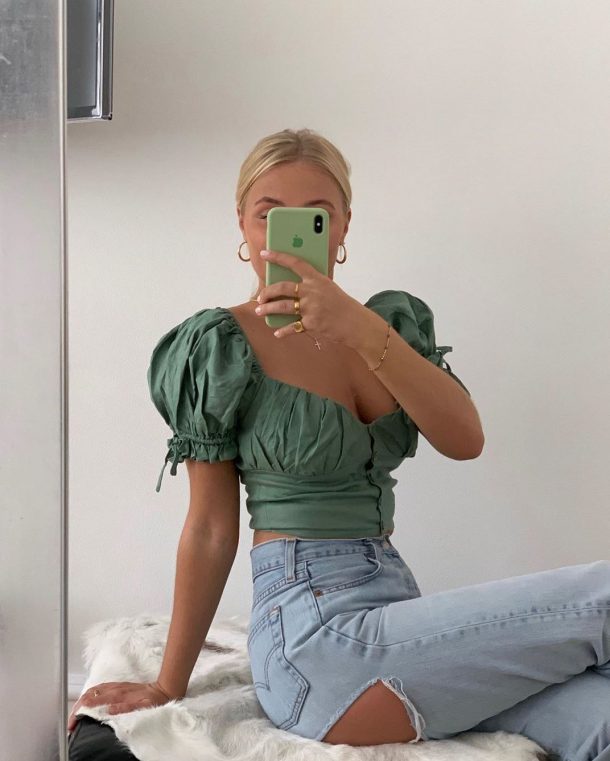 Next story
10 Fall Nail Art Ideas You’ll Wish To Try
Nailbeds – the tiny, little canvases that they are – say a lot when it comes to changing seasons. With the first month of Autumn coming to an end and…